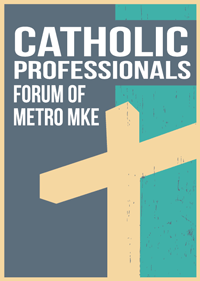 Through monthly breakfast meetings, we connect with other Milwaukee-area business people, learn about community and government issues, and are strengthened in our relationships with Jesus Christ. We strive to conduct business each day in a manner guided by the Gospel message and by the teachings of the Church.

Catholic Professionals Forum of Metro Milwaukee holds monthly breakfast meetings (7:30-9 a.m.), except for a summer break. We usually meet at Westmoor Country Club in Brookfield – across Moorland Road from Brookfield Square. Registrations must be made in advance.

The guest speaker at our October 20 meeting will be Brig. Gen. Matthew Strub, deputy adjutant general for Army. As such, he commands the Wisconsin Army National Guard.

Gen. Strub mobilized for federal service four times during his career — twice for stateside MEDEVAC mission support, and twice for combat service to Iraq and Afghanistan. He has also responded to domestic operations, most notably New Orleans in the wake of Hurricane Katrina, and the Red River Floods in North Dakota. He is a master aviator with more than 3,600 flight hours.

Please register in advance so we can have enough food and seating. $25 if pre-paid; $28 at the door if pre-registered.